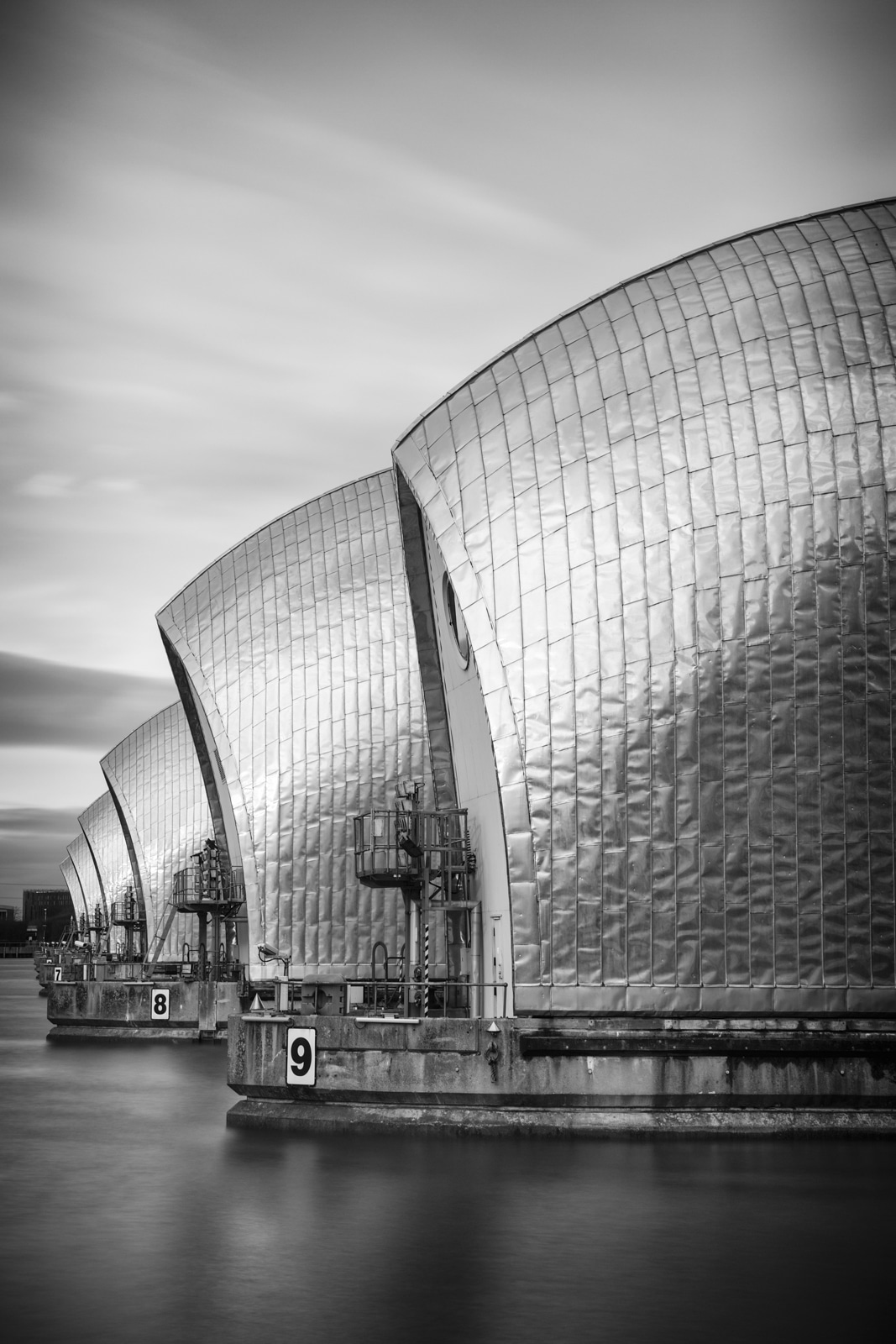 I’m not sure why I thought The Thames Barrier was further East? I’m looking at a map and of course it is just down the river from the O2. It looked like there might be a break in the weather, so I thought I’d head carefully North from flooding Tunbridge Wells and take a look. The roads were fairly treacherous, so I took it slow buoyed by the sight of blue skies over London.

You can park at the Thames Barrier Information Centre for £1.50 a day which is very reasonable.

There was some interest in the sky, a bit of blue, a few wispy clouds and the menace of grey rain to the South. I did a reccy to the West of The Barrier and found the tide was low. One of London’s many ‘Beaches’ was on show, a mating pair of Ducks splashed about on the shoreline and there in all it’s futuristic silver foil-like splendour was the gleaming structure of the Thames Barrier. I decided to grab a coffee from The View café while I had a think about how I was going to approach photographing The Thames Barrier.

From the carpark my first thought was an abstract view of the tops of the barrier I could see above the grassy embankment. Sometimes you see a shot and in essence it is just not doable. I found a reasonable angle and on this occasion got what I was after. 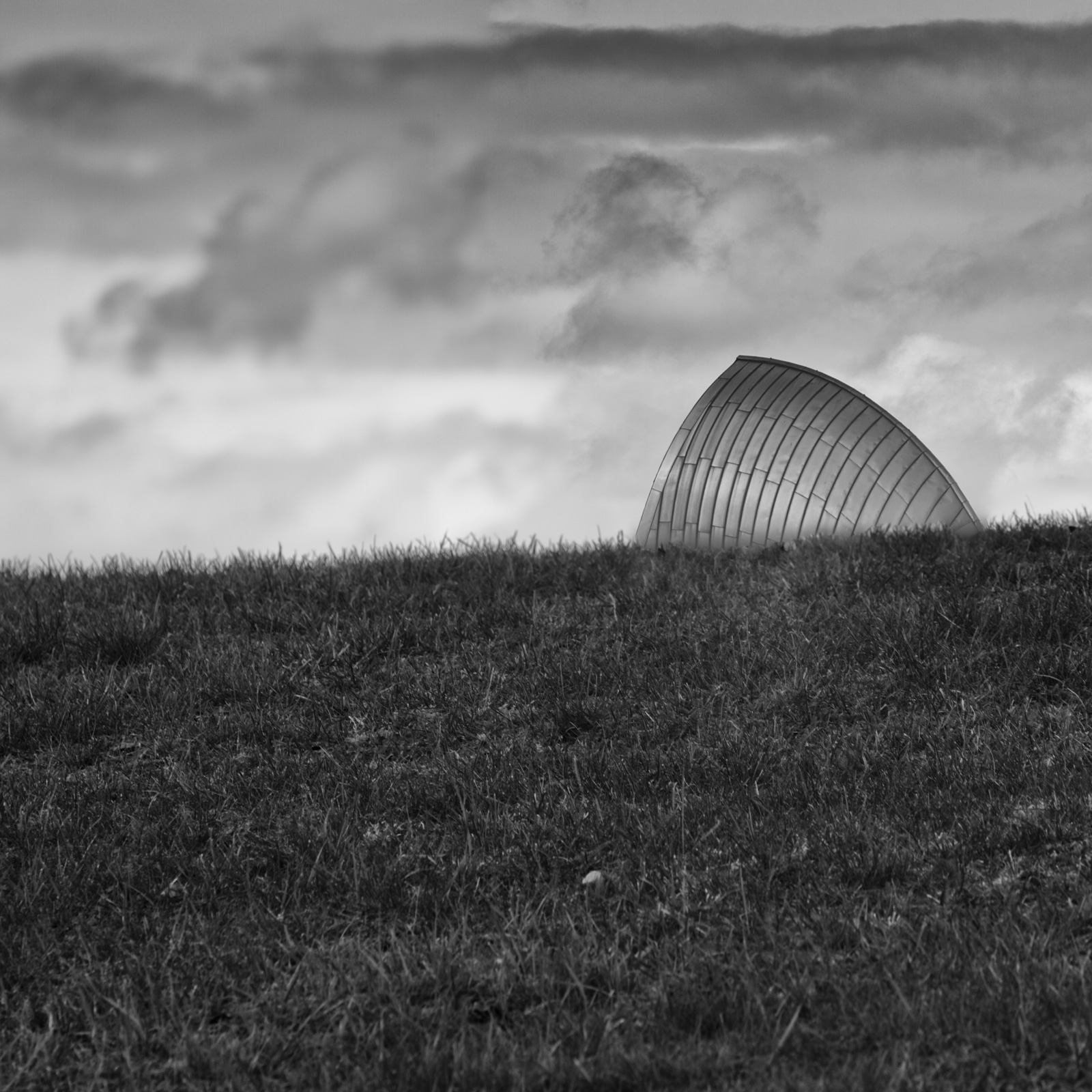 There are many ways to shoot The Thames Barrier. I’d erred from studying shots by other Landscape photographers and opted to arrive and approach the structure in whatever way took me, on seeing it for the first time. I worked for about 2 hours working between wider angles and using my 70-200 f2.8 L IS to isolate more abstract detail shots.

In the back of my mind was an ‘Environmental Landscape’ competition I had spied earlier in the day. It gave me more direction and perhaps a loose brief to work with. With the recent weather so fresh in everyone’s minds, the storm surge only just abated, it seemed somehow fitting to be stood at the feet of The Thames Barrier, largely London’s last line of defense in these matters.

The silver cladding of the Barrier captures the light wonderfully but it also makes for some tricky exposures. I was actually spellbound by the structure’s beauty. Its curves reminded me of the Sydeny Opera House. I shot both abstract, architecturally, I worked with longer exposures and also looked at how focal length and framing might add drama by including the city beyond from the East. Part of me thinking of the competition brief wanted to show an expanse of calm water, the Thames Barrier and the City of London beyond. I wanted that ‘stilled’ expanse of water to provide some sort of ironic drama, By using a long exposure I felt I could add emphasis to the structure juxtaposing it against the smooth water.

When I have more time I’ll visit the Information Centre to perhaps learn more about the structure and how it functions.

I was pleased with the images I created. The tide had risen considerably over the 2 hours I was there and the light was every changing as the cloud shifted overhead. The rain when it came, only lasted long enough to give me time for a coffee. I earmarked a number of shots I’d like to come back for at different times, one which will need a large group of fairly short schoolchildren and some strong light.

Using up Another of my 9 Lives

There is nothing quite like a spot of aquaplaning at 60mph on the A21, narrowly avoiding a car that had spun through 180 degrees to face the oncoming traffic to snap you out of that mildly self satisfied glow you have after what you feel has been a successful shoot. To go from that riverside calm, engrossed in the subject to what was a near death experience was quite sobering. If I thought that was it for the day, watching a tree fall ahead of the vehicle in front on the way back to Crowborough kept me very alert. In true post 3pm Friday afternoon fashion not a single motorist stopped to assist me as I dragged the tree from the carriageway.

After multiple dramas and arriving back to the office to find that my Mum was being plagued by scam bank phone calls I managed to miss the competition deadline by 1minute. Considering what had gone before I really couldn’t have cared less.

I re-visited The Thames Barrier for last light on Sunday after checking out the Emirates Air Cable Car and pottering around Greenwich. With the tide out the small ‘beach’ to the West of The Barrier was workable but be very aware how slippery those rocks are. There is not a great deal of foreground interest to be had but it does add something to the shots as I hope you’ll agree. Something I did notice which was an added bonus was that as the tide gently rose and fell along the shoreline there was a very soothing tinkling sound of what transpired to be broken glass, mostly smoothed by the tides that chimed against the stones on the shoreline.

As I was getting a final shot, a long exposure of about 30+ seconds I looked up to see a large Navy Frigate approaching the Barrier quickly from the West. I was mid exposure with Noise reduction about to cut in for another 30 seconds. I didn’t really have time to capture the stern of the ship, it’s red ensign flapping behind as it passed through the Barrier. It would have made for an interesting shot but alas I had seconds to dial in ISO1600 and hit the shutter and just caught it as a blur as it passed through.